Addison Holmes is a diamond in the rough, though she’s feeling more like a big lump of coal. Teaching history in Whiskey Bayou, Georgia isn’t exactly the most exciting job, but at least it’s stable. Until she finds her principal dead in the parking lot of the seedy gentleman’s club she was stripping in. Don’t judge. Teachers don’t exactly make the big bucks.

When Addison finds herself out of a job, she turns to her best friend, Kate, who owns the McClean Detective Agency. Addison is a natural at the job. Living in a small town has given her all the skills she needs to spy on other people and pass silent judgment. Sometimes being nosy has its advantages.

When her principal’s murder reveals more Whiskey Bayou secrets than people are comfortable with, the suspect list grows longer than Addison’s arm. Fortunately, the detective in charge seems more than capable of finding the killer and driving her crazy at the same time. 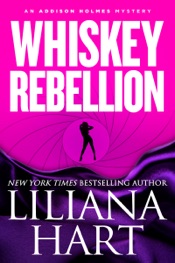