THE WICKED AFTERMATH is an emotionally gripping story of love, loss, and hope, with a rich and entrancing happily ever after. All Wicked novels may be enjoyed as stand-alone romances.

When the person you blame for your grief is the only one who can save you from the pain...

Tank Wicked lost his sister and has since vowed to save everyone else in his path. He lives by the creed of the Dark Knights motorcycle club, sworn to protect and respect his community. He selflessly saves lives as a volunteer firefighter and treats the men and women who work for him at his tattoo shop like family. But life isn’t a balance scale where good deeds negate bad things to come, and one foggy night life guts Tank once again. When a car careens over the side of a bridge and into a river, Tank springs into action, plunging into the water to rescue the passengers. Four people go into the river, but only three come out alive.

Leah Yates is just trying to make it through each day. When the man she blames for her grief becomes the only one who can pull her from the depths of despair, she discovers that even hope comes at a price. Maybe this time she won't have to face it alone.

****
About the Wickeds: Dark Knights at Bayside
Set on the sandy shores of Cape Cod, the Wickeds feature fiercely protective heroes, strong heroines, and unbreakable family bonds. If you think bikers are all the same, you haven't met the Dark Knights. The Dark Knights are a motorcycle club, not a gang. Their members stick together like family and will stop at nothing to keep their communities safe. Some of the Wickeds’ love stories will be hilariously fun and deeply emotional, others will tear at your heartstrings and include injections of humor, but they will all leave you wishing you could climb between the pages and join them. All Wicked novels may be enjoyed as standalone romances.

Find out more about these and many other steamy romance series in Melissa Foster’s big-family contemporary romance collection, Love in Bloom, featuring characters from all walks of life, from bikers and billionaires to blue-collar workers. You’ll love her fun, sexy, and relatable characters, and their real-life issues. You’re always guaranteed a happily ever after.

"Melissa Foster writes worlds that draw you in, with strong heroes and brave heroines surrounded by a community that makes you want to crawl right on through the page and live there. - NYT bestseller Julia Kent

"I highly recommend the Snow Sisters all the Braden and Remington books....They remind me of the McCarthy of Gansett series and The Green Mountain series." - I Love NY, Reviewer

"Foster writes characters that are complex and loyal, and each new story brings further depth and development to a redefined concept of family." - RT Book Reviews

"Emotional and sincere. Sweet and sexy. Hot and intense! More Whiskey please!!!" - Aaly and The Books

"Love, Strength and Loyalty. Those Whiskey boys are something else. WOW!" - Dirty South Books

"You can never go wrong with the heroes that Melissa Foster creates. She hasn't made one yet that I haven't fallen in love with." - Natalie the Biblioholic 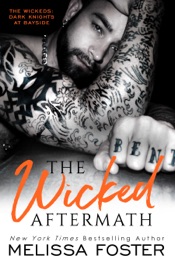 He slapped the cuffs on me and broke every law in the book.ALICIAGunner Murphy is a wicked son of a b*tch.Hes responsible for just about every illegal gun getting smuggled across the border.As a federal agent, its my job to bring him in.I just never expected it to be this hard.My new partner says he The Wicked Aftermath epub books

When Dorothy triumphed over the Wicked Witch of the West in L. Frank Baum's classic tale, we heard only her side of the story. But what about her arch-nemesis, the mysterious Witch? Where did she come from? How did she become so wicked?Gregory Maguire has created a fantasy world so rich and vivid th The Wicked Aftermath epub / PDF Books

SHE NEEDED A HERO<br> <br>Marcia Price realized she was in the hands of a monster as she was dragged deeper and deeper into the jungle. She wanted to give up so many times but dammit, no matter what, she would survive this even if it almost killed her. And maybe, just maybe, the universe The Wicked Aftermath epub / PDF Books

ZAGREUSDark, depraved, cursed. In every way the Prince of Darkness.Until he found her.She was his salvation. His sanity. His strength. The only constant in his immortal life. Even when fate ripped her from his arms, he always found her again. But five hundred years has passed since her last death, a The Wicked Aftermath epub books

NEW YORK TIMES BESTSELLER  Lizzy and Diesel are back in a wicked adventure from Janet Evanovich and Emmy Awardwinning co-author Phoef Sutton.  Before he was murdered and mummified nearly a century ago, notorious bootlegger Collier Peg Leg Dazzle discovered and re-hid a famous pirates treas The Wicked Aftermath epub / PDF Books

A #1 National Bestselling Regency RomanceHe's a rake accused of murder. She's the spinster accusing him. Enemies make the hottest lovers.Readers looking for a good historical mystery/romance or a historical with a little more kink will enjoy The Duke Who Knew Too Much. -Smart Bitches, Trashy BooksTh The Wicked Aftermath epub / PDF Books