It's one year after the 9/11 attacks and court reporter Alex Vane is fighting to break into the flashy world of TV news. But when he uncovers the scoop of a lifetime, his tightly-controlled world is rocked: his editor buries his story, a source turns up dead, and Alex finds himself at the center of a violent media conspiracy.

As he receives tips from a mysterious source, Alex enlists the help of a captivating professor, Camila Gray. Aided by an Internet genius, a billionaire's sexy widow, and a washed-up sports reporter, Alex and Camila discover a $500-million secret that could derail the largest media merger in history.

In his debut media thriller, A.C. Fuller brings you a young journalist chasing the biggest story of his career--from the courtrooms of New York City to the beaches of Hawaii, from a crowded newsroom to a lavish boardroom at the top of a media empire. 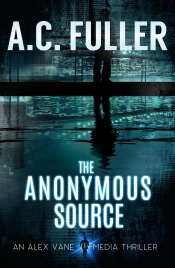