Cat-shifter Prince Quinn isn’t looking for a serious relationship. In fact, he’s never even considered it. He’s content to enjoy life to the fullest, never taking anything but his royal duties seriously. However, when a new scientist arrives to test for biological weapons, he can’t seem to stay away from her.

Dr. Tori Elliot is at the palace to do a job and no matter what she’s going to act like a professional, which means not succumbing to the seductively sexy playful prince.

About Lords of the Var Series
The cat-shifter princes were raised to not believe in love, especially love for one woman, and they will do everything in their power to live up to their father’s expectations. Oh, how the mighty will fall.
Lords of the Var series is a continuation of the bestselling romance series, Dragon Lords. 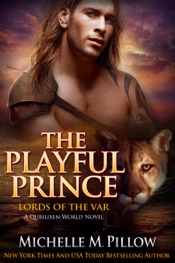