This collection of books contains:
1. Mason 2. Hawk 3. Dane Full description is below:
SEALs of Honor: Mason
In a dangerous profession where it's kill or be killed, Mason undertakes the dirty jobs others would rather not do--and invariably don't possess the skills he does to get done right. While on an assignment, he's single-minded in his dedication and focus. When he's not, this warrior plays as hard as he fights. The last thing he anticipates is meeting the one woman he wants but can't have…and equally can't forget.

Tesla, a software designer, lost her brother in combat. Getting close to another man enlisted in the military is something she refuses to do. In her quest to save other United States soldiers from her sibling's tragic fate, she's created a computer program capable of saving lives. When other countries find out about the program, her good intentions are met with hostility and greed. They won't stop until they get their hands on it, and damn anyone who gets in the way. Realizing she's in danger, Tesla turns to Mason, the only man who might be able to save her--the very one she doesn't dare fall in love with…

SEALs of Honor: Hawk
Stumbling over a dead body is one hell of a way to start a vacation…

While growing up, Hawk was always the wild card, the one who couldn't sit still or find a place to belong. Becoming a SEAL gave him a niche and a purpose in the world like no other. Nevertheless, the wild man remains under the surface, waiting for the match to his flame. Ending up back home for a few days' R&R, Hawk notices a new, darker element has moved in next door--and, at least in part, it appears to involve a freckle-faced redhead from his past, the girl he never forgot.

Mia remembers her best friend's brother from her childhood only too well. What girl in her right mind could forget Hawk? As a boy, he'd been 24-7 fireworks, lighting up her life. Every encounter with him took her breath away and made her heart beat too fast. But Hawk, the man, home for a holiday, is harder, dangerous--and impossibly sexier than he'd been when she was just a star-struck kid longing to catch his eye.

Even as Mia is swept off her feet by her teenage-crush-turned-grownup-acute feelings for him, the town is hit by unprecedented violence…and Mia's smack-dab in the middle of the explosion.

SEALs of Honor: Dane
Since achieving his lifelong goal of becoming a Navy SEAL, Dane's life has been packed with action. He hasn't had the time or inclination to realize he wants and needs more. After seeing several of his closest friends fall in love with that someone special, he longs for something similar in his own life.

While on a mission hunting a chemical weapons terrorist, Dane runs into a woman who not only captivates him but fulfills his deepest desires. Unfortunately, the circumstances of her presence on the scene are more than a little suspicious. Damnably, Dane can't determine whose side she's actually on.

Marielle came to Germany for a short busman's holiday. She'd never expected to be running away from the very person she'd gone there to see--nor running into the arms of a man she's tempted to give herself to even knowing she can't keep him the way she wants to.

As the situation ping-pongs from bad to worse to utter desperation, lives--and hearts--are on the razor-edge between life and death. 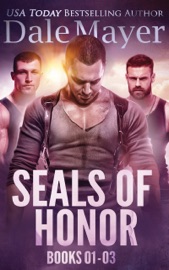